Lately he looks so cheerful. He laughs, he giggles, and he doesnt make unnecessary scene anymore.. The reason for that could be because he's started to go to school again after such a long break..

When he goes to school, the activities that they have really occupied him. If we were to make him stay in the house all day long, he'll be restless and that is when he starts to create unnecessary mess.

Just now, I went to pay for his school fees. Given the distance from my office to his school is not that near, I decided to pay for 3 months fee so that I dont have to come back anytime soon. After paying the 4 figures amount, I really started to feel the 'heat'.. But looking at his smiling face, I know that it's all worthy.. 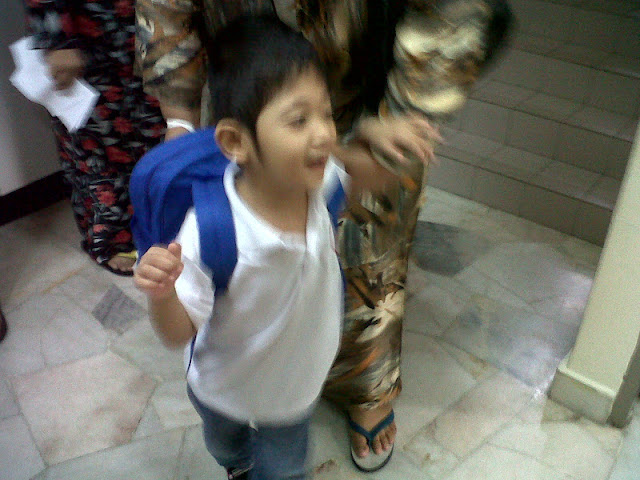 *Gambar goyang because he was walking towards me*

He looks so abang-abang with his school bag and uniform right? *smiling heart*

He has been getting good remarks from his school teachers. They were talking of how cheerful he looks, how cooperative he is, how his balancing is improving and how he interacts with others. Owh, Rayyan Ariff's teacher even told me that he also has a good friend by the name of Tatina or Titana.. Hahahhaa.. I guess, if he's able to talk, he will definitely keep on mentioning about his friend and what they did in school..

When we were walking out, the school bus driver said hi to us and Rayyan Ariff got another compliment, "Ooh.. You're going back with your mother today haa?? It's so good that he's progressing well. Look at him, he looks bright.."

Hehehe.. To me, I would say that he looks cheeky rather than bright.. Muahahaa..

Whatever it is, I'm thankful for this lil miracle of mine. Thank you Allah.

Actually, we're considering relocating in Subang area since we spent most of our Saturdays there. We would usually just sat around in the Surau or at the lobby area for the 2-3 hours gap between each therapy sessions. If we live nearby, we can just go back and dont have to waste our time there.

And it will be much harder if Rayyan Ariff got admitted for whatsoever reason. The distance, the travelling cost re fuel and toll, the traffic in MRR2.. Whoahhh.. *Lap peluh*

But now, seeing how happy he is at his current school, I dont think relocating is an option.

Hopefully, happiness and health will always be with you, son.
:-)
Posted by Jiey^Mien at 2:44 PM