Dua kejadian dalam satu hari.
.
A long-lost friend of mine sent a message to my FB, she asked me a simple question;
"Jiey, Rayyan sakit ke? Dh lama aku nak tanya tapi tak terkeluar.."
.
Happily, I replied "Dia tak sakit la.. Kalau sakit senang sket aku sapu ubat.. hehhehehe.. He was born prematurely with a different brain condition. Senang cerita, Rayyan ni anak istimewa la.. He went thru a lot during the first year of his life and Alhamdulillah, he's doing great. Doctors, for once, predicted that he may not be able to walk, to think, to see and to hear.. Ayat mudah, sayur la..
But looking at him now, with continuous support and stimulation, he is on his way to walking and he definitely has his own set of mind..
InsyaAllah, nk masuk skolah dah tak lama lagi tu.. =)"
.
And the so called conversation continues..
.
Later in the afternoon, we brought Rayyan Ariff to JJ Maluri to celebrate his birthday (belated celebration since mama was visited by high fever a day before).. We brought him to the kidz centre and let him play and walk as much as he wanted to..
. 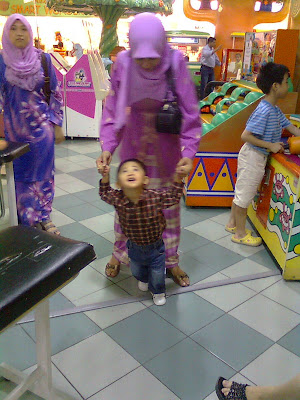 Then, a nice big slice of SR's Chocolate indulgence were given to him to complete his birthday celebration.. ~@Owh, hadiah in advance kan dh bagi.. The white study table set, remember?:P @~
.
Being him, he still wanted to walk eventho everyone is busy stuffing themselves with food at the FoodCourt. So I let the rest of the family eat while I was busy holding Rayyan Ariff's hand and walked him around.
.
"Kak, kenapa kepala dia tu kak?" I was bluntly greeted by one of the cook there.
"Dia banyak baring.. Tu yang jadi leper macam ni.." I replied with a smile.
"Elleh tipu, ni mesti dia sakit kan?" Still, he was being bluntly rude.
"Dik, kalau dia sakit, bleh la akak bagi ubat.. Dia ni delay, umur 11 bulan baru ada good head control. Before that, most of the time, terbaring jer.. Itu yang kepala dia leper tu.."
"Ooohhh.." A short reply to show his satisfaction towards my explanation.
.
I was not affected by his words. Not at all. Maybe because it's Rayyan Ariff's birthday. so I kept on restraining myself from being 'killed' by these kind of things..
.
Sungguh, Rayyan Ariff tak sakit. Kalau dia sakit, bagitau saya apa sakitnya? Walau maknanya saya harus berlari ke langit untuk mendapatkan penawarnya, saya sanggup. But the thing is, he is not sick. He was born with a different condition and ability. So that's why he's unique and so special.. All he needs is the right stimulation coupled with some hard work. And of course, blessings from the Almighty.. That's it. =)
. 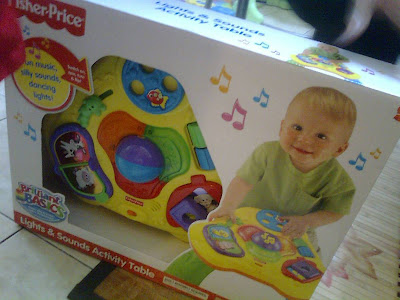 Birthday gift from uncle.. Thanks Uncle!