For mothers of special needs baby..

Currently, I’m STILL reading ‘What to do about your brain-injured child” by Glenn Doman. Not even half way through yet.. Well, need to divide between Rayyan, reading and blogging.. :P
. 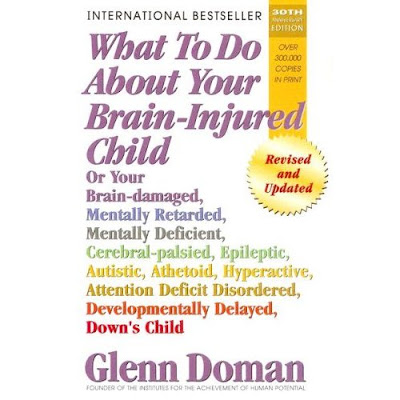 I came to know about this book from another mother of special needs baby. We work in the same place but it’s quite funny that after 3 years working there, I don’t even know about this special mommy.
.
When I was talking about Rayyan with my colleagues, they suggested for me to approach this special mommy. And I did.
.
Being a mother for a special needs child for 6 years made her a very knowledgeable person when it comes to brain-injured child. She introduced me to Glenn Doman method, oxygen treatment to boost up brain cells development and a few other things.
.
In her case, the child died at the age of 6. I didn’t dare to ask why. Worried that it will bring back the old memories.. Even to ask all the questions that I’ve asked, was very hard to do. But she was calmed and very clear when she talked.
.
Her child was not doing good. Bedridden and cannot see. But he had good hearing ability. The mother continuously stimulates the child hearing by using rattles and other toys every single morning and night.
.
Even her house doesn’t really look likes a real house. It was more to a rehab centre with all the equipments. She really went all out on her child. But of course, she still regrets of not doing certain things and she hopes that I’ll do it to my baby.
.
Back to the book I’m reading.. I’ll share a few bits that really make me high up.
.
Some of the children who were completely blind will end up reading – not only with their fingers but with their eyes, like everybody else. Some will remain blind.
.
Some of the children who were completely paralyzed will end up walking, running and jumping – not with braces or crutches but with their legs like everybody else. Some will fail to work.
.
Some of the children who were unable to make sounds will end up talking – otwihheir fingers by pointing and pantomime but with their lips and mouths, like everybody else.
.
Some who writhed endlessly or could not remain still will find an end to their writhing.
.


Some of the children who were paralyzed and speechless and blind and deaf will end up totally well and in the same school and grade as their normal peers. In short, they will be normal.
.
Others will end up walking, talking and dancing and perhaps with IQs in the genius are.
.
The results, therefore, will range from TOTAL SUCCESS to TOTAL FAILURE.
.
Some of Glenn Doman’s books :-
Glenn Doman’s son, Douglas Doman will give a talk on “What To Do About Your Brain Injured Child” (Suitable for parents with children with cerebral palsy, Down Syndrome, developmental delay, Autism, Hyperactive) 2nd April 2009 8.00pm-10.00pm.
.
Venue : Tropicana Golf & Country Resort , Petaling Jaya. And the cost will be RM80 per person.
.
For once, I’m so thrilled to go to a seminar.. :P Furthermore, tonite, the hall will be filled with parents of special needs baby and I’ll be so relax. No more restless feelings. Coz I know, we’re in the same shoes. And I don’t have to feel uncomfortable to listen to “Anak akak dah bangun jatuh dah.. anak kamu??” “Anak abg, kalau abg nak gi keje, bergantung kat kaki sambil nangis2, anak kamu tak ngikut ke??”
.
Honestly, I don’t know how to react when I’m in those situations.. Paling2 senyum je la kan?? Bukan jelous ke apa coz I’m thankful for what I have. In fact, I have a miracle strory to tell.. Hahhaha.. Cuma seriously, taktau nak react.. :P
.
It’s different tau. Kalau baca pasal milestones of other babies kat blog kwn2, kita bleh senyum and kata, "InsyaAllah, Rayyan will be like that in the near future.” And I can choose not to drop a comment. Tp kalau depan2 org excited macam tu, takkan nak angkat tangan tadah doa pastu ulang ayat "InsyaAllah, Rayyan will be like your kid in the near future.” :P
.
And I don’t blame those abang-and-kakak-kat-office for those story telling. They’re just being excited about their babies’ achievement. I also did that. Smlm, Rayyan dah boleh tepuk2 tangan.. Kalut telefon mommy kat kampong coz nak bgtau.. Hubby plak, sibuk nak record. Tapi tak sempat.. Hmm.. How weird a parent can be kan?? Hehheheh..
Something for you guys:
http://www.iahp.org/Kyle-Video.413.0.html
P/s - I don’t know in which range will Rayyan falls in 10 or 20 years from now (kalau kami dipanjangkan umur.. :P ). One thing for sure, years ahead (sekali lagi, kalau dipanjangkan umur), I will be reading this post again. If Rayyan is doing so well, I’ll be proud of him and myself. Even if he’s not, I will still be proud of him and myself for TRYING!
.
Believe in you child, you have everything to gain and nothing to loose..
Jom lah ibu-ibu dan ayah-ayah sekalian..
Posted by Jiey^Mien at 1:38 PM

Labels: Being a mother, Blogging, Development, Me

Jiey.
Ya you should be proud of urself for trying and i'm sure Ian will be much much much better. Double triple proud.You deserve that!

don't forget to share your esperience attending that seminar ya!

Dear...Mind sharing what was in the seminar? Bet lotsa mommies, be it with special child or normal ones would love to hear it from you..:)Sharing is caring, dok gitu. mek?

my mom pun ade this book, in fact siap ade signiture by glen doman..cume me xde mase nk baca.
it is indeed a gud method.