Last sunday, I still had bad cough and sore throat. So I asked hubby to bring me to Klinik Segara in Taman Dagang. Since Ampang Point is just nearby, might as well we go there and pick a few things for Ian. And we did. *wink*wink*
. 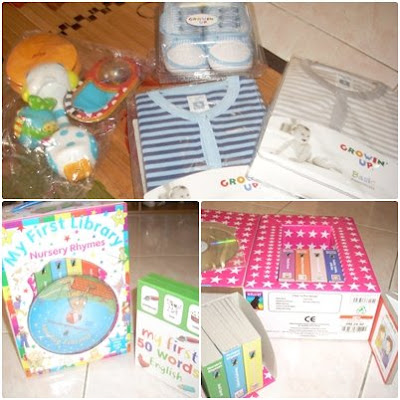 At Mom's Care, nothing much attracted me this time . I just bought 2 sleepsuits, a pair of shoes and rattles.
.
Next, I went to Popular Book Store. Bought 2 things for Ian; Nursery Rhymes and flash cards.Hmm.. Definitely not what I want. I wish I had really look at it before I bought it. The nursery rhymes comes with a free audio CD. It consists of 8 pocket size hard cover books and placed in 2 small book shelves shaped box. Most importantly, it's for preschool students. Hehhhe.. Salah beli. Malu.. Malu..
.
And the flash cards, I don't think this one is suitable for Ian at this moment. It's too advance. Nevermind.. I can use it later. Ok, no more shopping after this. I've ordered 3 sets of G.Doman Flash cards.. The cost is about RM1k if I'm not mistaken.. Huhuhu.. Kering poket demi anak..
. 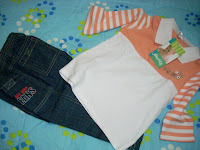 I also bought a pair of Baby Kiko jeans for only RM29.90, which is half of the normal price. Same goes to Anakku T-shirt.. only RM27.90, 10% off.. Boleh jadi gila kalau byk sangat sale.. :P
.
Then only we went to Klinik Segara. Ian and ayah were in the car. It was very hot outside since it's 12pm. I had to wait for quite some times since there was only one doctor and another staff. After a while, it's my turn.. When I was with the Dr, I heard a very loud cry outside.
.
It was an emergency case. One boy felt onto the ground when he was riding a motorbike with his father. The Dr. asked me to wait again since that one is emergency. Ok.. I'm fine with that. Of course I can't compare my cough with that boy swollen forehead.. ;P
.
After a while, the Dr. came back. She wrote a referral letter for the boy. She asked the father to bring the boy to the hospital asap for detail check up.
.
Then of course, my episode of waiting continues.
.
I was at the counter when the boy, together with his father and his sister left. And guess what? They're still riding the motorcycle.. And again, without helmets for both 5 years old boys and 3 years old girl..
.
When I went to hubby's car at about 1.30pm.. I saw hubby and Ian both sleeping soundly.. Hubby tido ternganga, Ian tido terkangkang atas riba hubby.. Hehehhe.. So cute.. Tp syg, lupa nak amik gambar.. :P
. 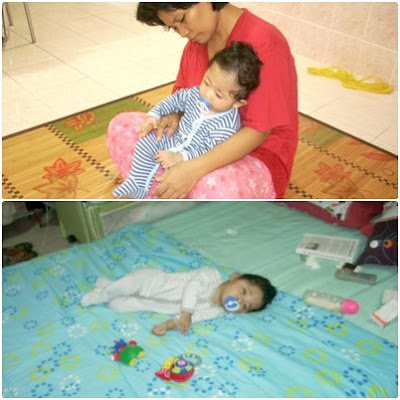 Ian in his new sleepsuits.. With Bibik..
.