I noticed that in most all of the blogs that I’ve been, there will be a milestone updates by the mother or the father every time their babies turned another month older. I don't think that I have the monthly updates here. Because if I were to update Ian’s development by month, I might end up with having nothing to write.. :P

So I just followed the flows. Each time Ian accomplished something, I will straight away post it here. So the next time I want to know when or at what age he was able to do something, I just have to search for it under the ‘Development’ label.

Ian will turn 19 months old in just a few days. Looking at where he is right now, is definitely wayyy too far from what we have been told to expect by the doctors. Out of 6 doctors, 4 mentioned about termination of pregnancy.. And I’m so glad that abortion has never been an option to us. Looking at his smile and his sweetness, this journey seems so worthy..

I’m going to list down Ian’s progress here so that it can be an ease of reference to me later. Every time Ian acquire something new, I just need to update this post.. =)

Now, at the age of approaching 19 months old, these are all the things that my charming little boy has achieved:-

Ian can definitely sit on his own. He’s also not afraid to use both hands while sitting anymore. Previously, he needs his hand to support him while sitting but now, he can use his hand to play with his toys already. He can also turn to his left or right side in this position. Better still, he can also move aside or backward by using his hand to push, and moves his butt off. If I were to put him in front of the sofa, the next time I turned, he’s already at the sliding door or trying to get something under the sofa (most of the times, it will be his toys that he has threw) 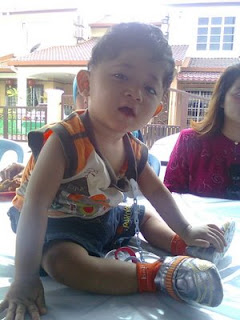 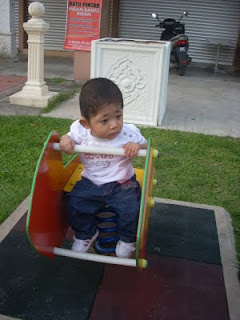 Ian is also getting better at standing. Though his back is still not really strong yet, but he’s able to hold his upper body better. Not just he can stand by leaning against the wall; he can also stand while holding to something. Now, he started to move his leg while standing. I think that he still has a very long way to go before he can cruise, but at this point of time.. We’re encouraging him to do so by teaching him the moves. 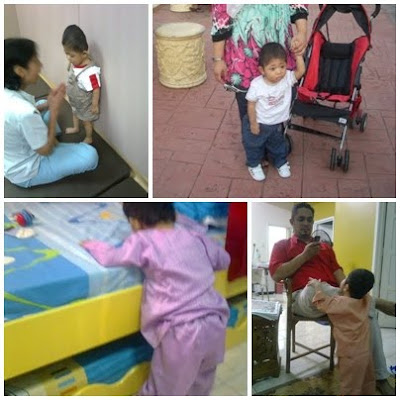 There is still no sign that Ian wants to start crawling on his knee. Even on his stomach, he still crawls backward. But if we were to put him in crawling position, he cooperates well and his hands can also support his body nicely. According to his physiotherapist, it will be quite a challenge for him to creep or crawl since his back is not strong yet. So we need to focus more on the back, by doing more exercise on the gym ball. Though, he only moves by rolling now, but he’s able to push himself up while he was laying on his back already..

He’s focusing well. Though he still has crossed eyes, but it is only obvious if he’s looking at something that is quite a distance away. We still don’t know whether he needs to wear a spec to rectify the crossed eyes or not. With the use of flash cards, I think it also helps his eyes ability.

He started off having no hearing ability at all. Now, he can hear loud noises and he is lip reading most of the time. I hope, he will adjust well when he gets his hearing aid later. But the first week with the devices will be quite a challenge since he’s not use to loudness. I really hope that he can get through that that phase nicely.

I guess he’s doing well on this one. He enjoys playing with his Fisher Price Brilliant Basic Rock-a-stack. And he’s able to put all the stacks in nicely. Ian also loves to play throw and catch with his ayah. So I guess these really shows that his hands and eyes coordination is working just fine.. =) 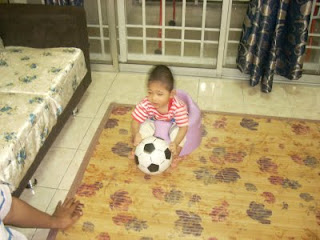 Oh, we’re still working on this one. We have introduced Ian to different textures and let him play with the theraputty, dough , cloths and we even brushed his foot, hands and body using many different things to stimulate his sensory. He’s really getting better.. before, he totally refused to put his foot down but now, not anymore.. =)

He definitely has this! For example, he calls me Mama.. And he only said mama when he saw me. Not to others. He also sings the same song every time he entered the bath room (by singing , what I really meant is babbling with rhythm. :P). I think there are a few other things that show he is consistent. I’ll add it later once I can think of anything else k..

When it comes to something new, he will surely think of how to play with it and he won’t stop. Not until he figure out how the things work. I guess that shows some thinking there right? =)

Hoho..This is another good thing.. Ian is always afraid of swimming in the pool because the water is cold. We brought him to swim once and 2 weeks later, we passed by the swimming pool area and he started to hold on to me tightly and cried. He was so afraid that we’re going to make him swim again.. :P

Same goes to other thing that we taught him. It may take a while for him to do it, but after that, he’s good as any other kids can be. =)

He know that he’s supposed to clap after “If you’re happy and you know it clap your hand” song.. He knows how to “Salam”.. And many more..

He’s making lots of sound nowadays. But most of it is baby talks. Beside babbling and imitate sounds that he heard from us, he can only says Mama.. I hope after he gets his hearing aid, his speech development will be better.

Owh, he’s definitely eager to learn new thing! Every time I showed him something new, he will really observe it. He’s attention span is also good. His neurologist even told us that we can teach him lots of things since he can really focus on something for quite some times.

Besides showing interest in playing with his peers, he also knows how to calm us down when he’s about to be scolded by us. Every time I raised my voice, he’ll give this one cheeky looks on his face, smile and started to giggle.. So cute! Come to think about it, how can you really scold a cute looking little boy.. But trust me, when it comes to teaching them a lesson, a must is a must! :P

There are lots more that I want to share here. Like how he relate things when he cried every time I put my tudung on because he’s afraid that I might leave him (kecik2 dah pandai ngikut), how he will automatically look at the fan every time I walked to the switch panel. How he automatically look at the air-conditioner every time he entered a cold room, or when he saw me holding the air-cond remote control, but my little boy is awake already. Need to stop now. I’ll put the link to this post on the side bar so next time, it will be easier for me to just update Ian’s milestone here. =)

P/s – Even if he did not achieve all the above, we would still be of the view that we have no rights to take away one’s life just because he will not be perfect like others. Well, perfection can be overrated most of the time, right? :P

i just stumble upon your blog from blog hopping sana sini... admire yours strenght.

keep on writing on ian's progress.

A big clap for Ian !!! Yeay !!! Also to this strong mama for being such a tough cookie despite all the hurtful and unimaginable things predicted by the doctors...Insya Allah Ian will progress very well in the future...Amiinn...