Things to be thankful for..

As usual, our Thursday routine is our weekly visit to SDMC. Starting from next month, we’ll be going for twice a week.. And mind you, I’m the one who requested for it.. =)
.
Actually, I’m really looking forward for each and every therapy session. Not just it can benefit Rayyan physically, but I also gained something from it, and it’s mentally! It’s really heartening to hear such inspiring stories of other special needs children. It melts my heart to hear what those parents did just to see their children walk and achieve other things that are seem so simple to do for a typical child.
.
I guess, Ms Sarjit can feel my anxiety and my eagerness to see Ian do all the things that other kid of his age is doing. Then she gave me a few words to calm me down.
.
Without me realizing it, I’m actually putting so much pressure on my baby and he definitely can feel it. I should take a step back and let him enjoy himself while making him do all the things that he’s supposed to do.
.
“He’s a brain injured child, and yet, he’s very alert to his surroundings, he recognized you as his mother, he’s playful and smile a lot. You have so many things to be thankful for. He may be a bit slow but he should be okay which means that he should be able to do what other kids do.”
.
Yes, deep down inside, I know he can. It’s just a matter of time. And I’m really thankful for all the wonderful things that Allah SWT has given us.
.
He has given eyes that are seeing perfectly, to Rayyan. Even though we still don’t know whether he needs to wear glasses or not in the future.
He has given ears that are listening, to Rayyan. Even though it’s only hear partially for the time being.
He has given hands that can hold things nicely, to Rayyan. Even though it’s having sensory problem.
He has given Rayyan two beautiful legs that are extremely sensitive, for us to train it without giving up.
He has given Rayyan a brain that is functioning really well despite not being the same like others.
He has given Rayyan the way to figure out; how to give the sweetest smile to everyone around him, so that he can also melt their hearts.
. 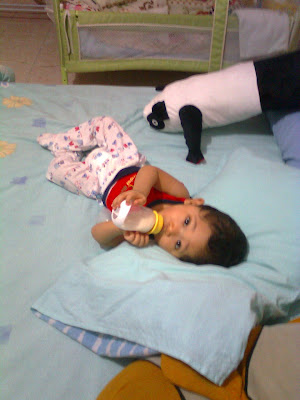 And we're so thankful that he's able to drink his milk all by himself and goes straight away to sleep even though we have been told before, that he may need to be fed using a feeding tube that will be inserted thru his mouth or his nostril, straight to his stomach . =)

He has given us, a very special child from heaven.. Who had opened our eyes to so many things, and touched so many hearts in his own unique way.. Alhamdulillah..

P/s - If I ever forget to be thankful again, dearest friends, you guys are most welcomed to knock my head off!! :P

Labels: Being a mother, Development, Emo, Ian's story, Me

" He has given us, a very special child from heaven.. Who had opened our eyes to so many things, and touched so many hearts in his own unique way.. Alhamdulillah.. "

to knock your head off? me first!!!hahahahaha
even nuha is lazy to drink her milk all by herself :(

i do believe ian will be like other child who can do anything by his own...just wait n see...go ian..sayang u...

Had the same feeling with Dina. Ada ketika hati ini jadi tak sabar nak tunggu dia progress...Even small little things that may look simple to any other normal children, looks so difficult to her. Small little things that looks so natural to other kids, with these special children, we have to train them, simulate them...and eventually insya-Allah diaorang boleh buat...as you and hubby said, Ian is a FIGHTER !!!

Verily, He knows what He did..because we belong to Him.He creates us for a purpose matter.the ONLY and the ONE-to BERSYUKUR.He gave you the special nice little boy to be proud off and to make people out there aware that many of us still suffer lot more than this..thanks to Allah for this beautiful nice creatures..and He knows K.jiey and family can face this obstacles undoubtly at all..and i think i wanna call you Super Mama la k.jiey!bley?hehe

saya belum baca habis blog jiey nih, br jumpa..u r a supermom..keep up the good work..kagum sungguh saya dgn ketabahan jiey n hubby.
your ian bday sama dgn anak no2 saya, ceaser juga 3weeks early.
i suggest u baca buku glenn doman, if u worry about his future education. i ada satu i can send it to you if you want. ctc me okay :)