There’re so much for me to update but I just could not find the time to do it. Can someone teach me how to post entry using Blackberry? I guess it will be much easier if I know how to do that. At least I can write something while putting the children to bed.. =P

OK, back to the above topic.

Last Sunday, the kids were enjoying their favourite Gardenia bread and they were sitting next to each other. Out of the sudden, Rayyan Ariff turned to his baby sister and gave her a kiss on the cheek. He turned to his nenek with a very sweet smile on his face and gave her a kiss as well. My heart was melting with what he did and I said to him, “Good boy, Ian.. Very good..” I smiled and clapped my hands.

He turned to me who was sitting on the couch which is just behind him, pulled himself up and gave me a kiss too.

The best feeling ever and I definitely don’t know how to describe it. That was not the first time he gave us kisses. But that one is really meaningful since he gave it to everyone, especially his baby sister.

He tends to have this love-hate feeling for his sister. So, for him to give her a kiss voluntarily, is just adorable. He can be quite harsh with his sister at certain times because he looks at her as the one who stole the spotlight and he’s now no longer the centre of attraction.

Rifa Aleesya herself seems to understand her brother well and most of the time, quite tolerable in the sense that she’s OK with her brother stealing away her toys. Just a little noise and it won’t get prolong into unnecessary loud cries. 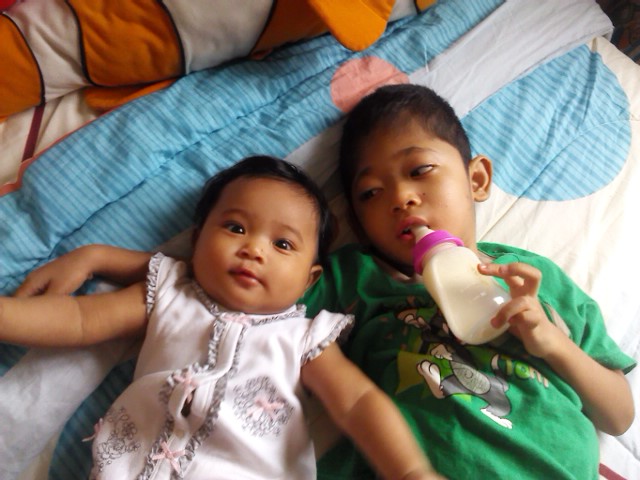 I hope this love grows deeper every day. InsyaAllah.

And if you notice something from the above, you will definitely say the same thing as what Rayyan Ariff’s therapist said the other day, “He’s not dull at all. He knows how to express his feelings. He knows that when you love someone, you give them hugs and kisses..”