Man, time really flies huh? I was looking at Ian's birthday ticker and I realize that Ian turns 9 months today!.. Although the Doctors are looking at his corrected age which is 7 months old, but officially, he's 9 months and he'll be 1 year old in 3 months time.
. 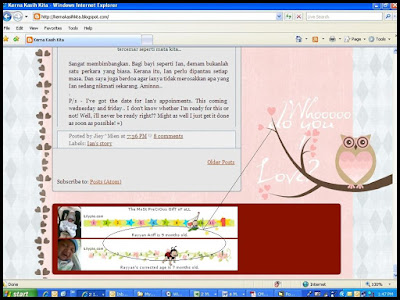 .
I seriously forgot that he's already 9 months.. He's so much of a newborn to me.. Feels like yesterday I heard his first cry. And now, his screams become music to our ears. Most all of the time. Bikin bingit.. Hehehhe.. And today, on his 9 months birthday, he surprised me with something..
.
I arrived home a bit late today (again!), and went near him. When he saw me, he opened his arm, asking me to take him and hold him in my arms, and HE CRIED!! Tears that are full of sadness.. Ooohh.. So sweet.. He missed me! And the most important thing, he DOES mind of me not being around with him!! He loves me!! And he definitely recognizes me as his mother.. Awwww.. Sweet like honey la you Rayyan! Oohh.. Makcik cukup sookaa!! :P
.
On the other hand, I'm not devastated that he still cannot do most of the things that typical baby of his age does. To me, he's doing sooo well. 9 months back, we was not even sure what will happen and most importantly, whether he's going to be here with us. Luckily he did. Alhamdulillah.. This is what we call, defying the odd!!
. 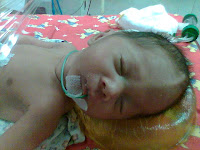 .
Talking about turning 1 year, hubby did mention that he wants to throw a small birthday bash at any fast food restaurant. (When he said small, I wonder how small is "small" when we have lots of friends that need to be invited - including my blogger buddies.. =)
.
But I told him that it is not a good idea for the time being. What till Ian's next birtday la kan?? My target is that, by the age of 2, Ian is able to walk on his own.. (If he achieve it wayyy before that, then we're truly blessed..). Hmm.. I hope it is achieveable. It has been a month since his last physiotherapy session. Both of us were too busy being busy till we could not even squeeze Ian's therapy session in our schedule.. Haihhh.. When la all this craziness and madness of work will come to an end??
.
P/s - Ooo.. I'm so touched! Can't stop smiling!!! My baby missed me!! So much till he cried when he saw me!! :P
Posted by Jiey^Mien at 11:02 PM