Entry from my previous blog

I have ths one very cute ikan laga and I named him Effiey. Still, I dunno whether it’s a he or she. But since the nature of ikan laga is its strength, so I personally think that Effiey is a he. I bought him for our little man-made pond, (hubby n I fail to maintain the pond well, so there’re lots of mosquito larva in it).. I put Effiey inside it, but then again, Effiey fail to eat everything up. It’s too much for his tiny stomach. So we take Effiey out and put him inside a very nice balang kaca.

Huaarghhh.. (I almost turn into a cute but much-smaller-green animal called ‘the incredible hulk’) --> if I can make my own hulk, I wnt to be a blue one. Green is jst not my fav. I DON’T WANT AQUARIUM FOR EFFIEY LA.. he doesn’t need that. He wants to be in a nice and sophisticated balang kaca. Baru la nampak Effiey punyer professionalism. Spoil la.. dah beli kalo x pki kang membazir plak..

Hubby, I’m not mad at you la.. In fact, it’s quite thoughtful of you to buy something for my Effiey. The truth is, after Iftar with the member of SC’s MT Association last nite, balik kena kemas rumah n prepare brg for my KMRmates get-together-Iftar at our place today, I’m exhausted! Petang ni nk blk masak for them lagi. I know it’s my thing n u got nothing to do wth it, but I can’t help it. When I’m too tired n don’t get enuff sleep, u know that I’ll get a bit cranky. Coz it’s only you that is there for me, so hubby kena la jadik mangsa untuk memujuk tatkala daku merajuk.. hehehhehe.. Not to worry k.. (n pls stop mintak maaf).. u did no wrong. Sj je nk jual mahal.. karang ok la ni.. 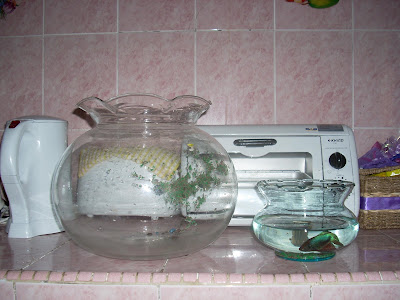