Besides all the zikr and verses of Quran that parents recite to put their baby to sleep, I guess it's a norm for parents to have a special song dedicated for their baby.. I don't know whether mine can be considered as a song or not coz it's just 2 lines - but of course, with melody lah.
.
What I sang to him?? I keep on repeating these lines.. Especially during NICU days..
.
"One healthy baby, one happy baby
One happy baby, one happy family.."
. 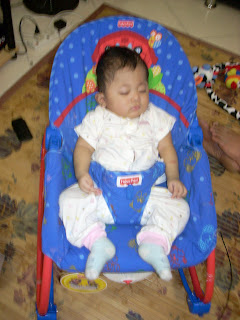 It's actually kata-kata semangat for Ian to be strong and keep on fighting. It's to tell him that he brought happiness in our little family. And what a special baby he is.
.
Just for those who doesnt know, in overcoming his prematurity, he passed with flying colors. No ROP. Gaining weight very well. And reflux stopped at 5 months old. What he's going through at the moment is not because he was born premature. Because of a desease that happens in 1 in every 1000 pregnancies.
.
In our case, it's not genetic and it's not virus infection. It's just happen. Kuasa Allah SWT. Satu anugerah. The longer he stays inside my womb (or any other mommy's womb), he's condition is getting worse and worse. Early delivery? I've requested for it during 28 weeks of pregnancy. But my gynea refused. It's a major thing for Ian. He needs to survive for being a premature baby and, for his serious medical condition. Double la kiranya.
.
Tp Allah SWT menetapkan Ian utk lahir lebih awal.. And I'm thankful for that. Since he's very strong, doctors can immediately do something to treat him. Of course, it's not that easy.. Born premature really put him in a difficult situation where he needs to go through 4 operations rather than just 1 i.e. stitches keep on reopen because there're not much skin tissues to cover his *****. Ok, that explain why we only brought him back when he weight 2.26kg. Not 1.8kg like other premie.
.
I've been scolded by someone from hubby's side for being so impatience to take him out. (Kata dia, kalau tunggu 9 bulan, mesti takyah went thru 4 operations). Yes, I was mad. Macam saya ni hadap sangat nak kuarkan anak saya awal2.. Kalau taktau tanya. Everything happened for a reason and in our case; it's for the best interest of the baby. If we were to wait till 36 weeks, then we need to choose either mother or baby. And baby's condition pun akan sangat teruk..
.
Looking at how he's progressing, doctor said it could be because of the early intervention. To us, it's because of Allah Yang Maha Esa. Bukankah sudah dinyatakan bahawa Dia takkan menguji hambaNya melebihi kemampuan hamba itu sendiri.
.
Every day that he woke up alive is a miracle. When they predicted him to live for 2/3 days, he has been with us for 7 and a half month. InsyaAllah.. More days to come.
.
I used to envy all the premiees who were 'just gaining weight' before then can go home. But I was totally wrong! Being premature is about fighting. For every breath they took, for every single days that they passed, these little warriors are true fighters. Every premiees has their own story.. And for Ian, the story to tell is a lil bit extra.. And what we're going thru right now is not because of his prematurity. In fact, I'm thankful that he was born earlier than the EDD. (Tp kalau lahir ikut EDD cun jugak.. Sama birthday dgn Ayah..) So for all premie mommies out there, InsyaAllah everything will be fine. There's always lights at the end of the tunnel (kalau malam or hujan skalipun, skrg ni dh ada lampu jalan.. So mmg akan ada lights! Kalau blackout satu semenanjung ke apa, xtau la nak kata..)
.

good to hear ryan is showing great process..n betul kate u for premie each of them hv different story and every min is different for them.
i remembered the doctor slalu ckp...for premie, its not a matter of today will not be the same for tomorrow BUT this minute will not be the same as next minute....every minute is a battle for them...and tats make them a tru fighter kan! =)

yeah... i agree... anak yang dilahirkan preemie ni memang true fighter. and memang born to be a tough fighter! the chosen one. and i've no regret despite the complication and all that.

and as ian, it's not because of the genetics. it's just happened on day 3. menunjukkan betapa hebatnya Yang Maha Kuasa. Kun Faya Kun. maka jadilah...

walaupun saya dah ada anak lain tapi perkembangan syafiah saya nanti²kan. i feel excited though she manages to do something extra, though that extra is something norm to other kids.

MommyOfTripletsPlusOne - I agree sgt2. Macam Harith & Athirah, kagum bila tgk diorg skrg compare dgn ms baru2 lahir n masa kat NICU. Hopefully Rayyan pun will grow to be a healthy and smart child like both of yours. Tabik spring kat mommy of triplets coz she managed to handle not just one, but 2 premie babies!