Ian's appointment with his ophthalmologist is in January. At first, we have decided not to take him to see his ophthalmologist. From our last visit, the Dr. has confirmed that he can see but she still insists of seeing him every 3 months just to make sure everything is OK.. Well, from our non-doctor-eyes pun kitorg leh tau that our baby can see.. Furthermore, I don't know how the test was done. They wont let parents to accompany their baby during the test as they said there has been a case where parents want to hit the Dr. for hurting their baby.
.
One thing for sure, everytime they took Ian in for the test, he cried so loud until we can hear him not just from outside of the room, but also, from outside of the clinic! The first test, when he was still in NICU. So I was not there. The second one, is still ok since he was still a small baby. But the third one in October, dia dah besar and dah pandai meronta nak lepaskan diri.. As a result of it, the Dr. accidently scratch his left eye's eye ball.. It took about 4 days for the scratch to disappear.. So that's why kitorg taknak bawak Ian gi jumpa his ophthalmologist.. We don't want to take the risk of loosing his vision just because of the test. Lagi la skrg ni dia dh besar, he's getting stronger and he's definitely good at memberontak! Kang tak pepasal tercucuk kang..
.
But the problem is, we think he's having crossed eyes. Ok, when babies were born, normally, they start see things by the age of three months. Before that, their vision is a bit blurry.. And when they start learning how to focus, it is common for their eyes to cross as they are learning how to team and coordinate their eye movements. And it should fully correct itself when the baby is 7 or 8 months old.
.
It's either the eye turns in towards the nose, or the eye turns out away from the nose.. Senang kata, juling la.. But of course, for Ian, it doesn't happen all the time and it is not as bad as a few months before. Kadang2 juling, kadang2 tak.. When we raised this thing up with Ian's paed, he just told us that it might disappear as the baby grows.. Well, hopefully it does. If not, then we may need to do "patching" i.e. close one eye (the dominant eye) so that another eye can really be used.
.
Why is this something that we need to worry?? Well, when each eye aims independently of the other or do not point at the same place simultaneously, 2 different images will be captured. When the brain receives two different images, it will protect itself from seeing double by suppressing, or "turning off" the crossed eye. Approving only one image. If it's not treated, the baby can be so dependent on the dominant eye and totally forgot that he has another eye i.e. can cause blindness.
.
One of my colleague's son is suffering from this. And they only found out bout it when the boy is 7 years old - ni kes yang x ketara.. Kadang2 juling, kadang2 tak.. The opthalmologist had already informed the parents that it's very highly unlikely that they may not be able to save one of his eye. But they're still trying. Skrg, budak tu pki speck & power pn tinggi gak.. Seribu lebih utk sebelah mata. Hopefully he'll be OK..
. 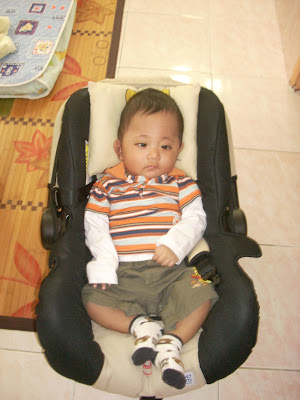 P/s - Last resort? Surgery.. Tp it just improve the eyes appearance, not the vision.. Huhuhu.. Mintak dijauhkan la.. Kalau boleh, no more surgery for Ian.. I guess we have no other option than to just bring him to see his ophthalmologist.. Hopefully there'll be no scratch or red eyes this time!! Hukhukhuk.. Siyan anak mama..